12 Reasons She’s Not Responding To Your Online Dating Messages 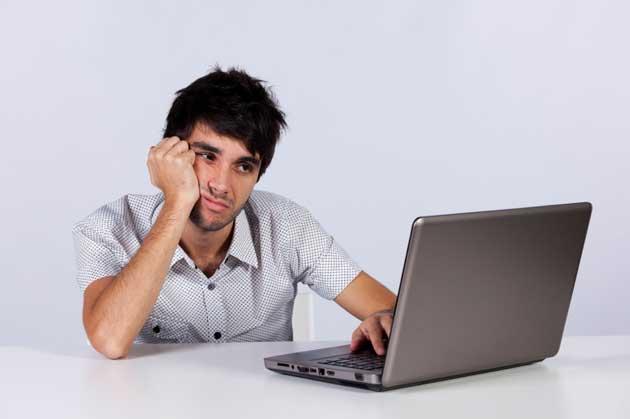 It’s one of the biggest complaints men have about online dating – they send many messages, but receive few replies. They are told “it’s a numbers game,” but the odds seem exceedingly slim.

On what may appear to be the cruel flip side, women receive copious e-mails – oftentimes more than they can keep up with. This is important to keep in mind when online dating and can give you the first clue as to why she’s not responding.

It’s frustrating, for sure, but if it makes you feel any better, the majority of messages I initiate are met with radio silence as well. Don’t take it personally. Online dating is extremely popular – there are likely loads of potential mates online in your area looking for love… but that also means there are loads of competitors as well.

Still, we humans like to try and make sense of things. When someone doesn’t reply, we want to know why. We’re going to assume you’ve already followed our tips for crafting a great profile, which is the first and most important step. Once you’re sure your profile is solid, the list below offers just a few possibilities of why she might not be responsive to your messages.

If it offends you that someone won’t take the time to reply to your message, remember that women often receive numerous messages every day, and frankly, responding to each one — even to say “Thanks, but I’m not interested” — would be incredibly time consuming. Moreover, even if she does, her response is often met with angry and insulting retorts, questions demanding why she’s uninterested, or pleas to just give the guy a chance. It’s honestly much less stressful for a woman to simply not reply.

(By the way, if you think this makes online dating a cakewalk for the ladies, think again.)

Now, there could be a number of reasons why she’s not interested – some of which have nothing to do with you and others which do. Reasons on either side of the coin are listed below.

When It’s Not You

Sometimes, just sometimes, the reason she’s not reciprocating your interest is attributed to forces beyond your control.

2. She’s seeing someone
It is very possible that she is currently dating someone and things are going well, but they haven’t made it “official” yet. Many women like to focus on one person at a time rather than play the field, but that doesn’t always mean she’s ready to delete her profile altogether. Hell, my ex and I dated for two freaking years and he never removed his profile. (He was a winner, I know.)

3. Her profile is inactive
Many online dating sites allow you to set up a profile for free, but in order to send or receive messages you must pay a fee. She could have created a profile during a “free weekend,” or perhaps she is a former member who stopped paying but her profile remains searchable. If this is the case, she’s simply unable to read or respond to your message, and there’s not much you can do about that.

4. Bad timing
In some instances, your message simply hits her inbox at the wrong time. Maybe she read your message while she was in a bad mood. Or maybe she’s overwhelmed at work or consumed by family matters or is laid up in traction in a hospital bed. Regardless of what’s going on in her life, it’s possible that dating just isn’t a top priority at the moment.

5. You got lost in the shuffle
As stated previously, women receive far, far more messages than men. Maybe yours came amid a flurry of other messages and somehow just got lost. Mind you, the majority of the time, this did not happen. Because what did we say? Most of the time she’s just not interested. BUT, there is a slight chance that she inadvertently skipped over you.

6. She’s got a lot of options
Guys, as much as I hate to use a ratings system, it’s one I know you’ll understand. Are you only messaging the 8s, 9s and 10s? Well, so is every other dude on that site. She can’t go out with all of them, because she doesn’t have that many outfits. She gets to be picky, and chances are you’re one of many she didn’t choose.

If the lady in question truly seems like the gal of your dreams and you think perhaps one of the five reasons above are to blame, you can try to send another e-mail in a few weeks. (Hint: do not send the exact same message you sent the first time.) BUT if she doesn’t respond to your second message, just let it go.

Other times, it’s totally you. Warning: truth bombs ahead.

7. She saw a dealbreaker in your profile
When I receive a message, I nearly always go check out the person’s pics and profile. And if I feel like he’s not a match, for whatever reason, I pass. There’s no telling specifically what turned her off, because every woman is different. Maybe she saw that you are serious about religion and she is an atheist. Maybe she saw that you love outdoor activities and she’s more of an indoorsy type. Maybe you like coffee and she likes tea. WHO KNOWS? It doesn’t matter. Just keep in mind that one woman’s deal breaker is another woman’s deal maker. If you’re honest in your profile, you’ll find your right match.

9. You brought up sex
Unless you’re on a sex-themed site or her profile explicitly says she is looking for casual hookups, a man who gets sexual with a complete stranger is a big turn-off to most women. Yes, we know you spend a lot of time thinking about sex and can’t live without it. Same here. You can’t live without oxygen either, but you don’t make a point of putting that in your profile, do you? Just steer clear of any kind of sex talk. There’s simply no way to talk about sex online without sounding creepy and she’ll think it’s the only thing you’re after.

10. Your grammar is God-awful
If you are seeking a woman with a brain, it’s almost guaranteed she’ll want the same in a man. Everyone makes a mistake every now and then, but if your profile and message is rife with glaring grammar and spelling errors, she may think you a bit dim. Also, stay away from texting slang and take the time to spell out actual words and phrases. Unless you’re looking for an 18-year-old who worships the Kardashians, “txt tlk” is likely to garner a big ignore.

12. Your message is lame
I know you guys send out a lot of messages with little return, but it is in fact important to focus on quality rather than quantity. Spend just a little time on crafting an appropriate message to her. Focus on more than her looks – women looking for relationships are often turned off by the idea that you’ve only noticed her appearance. Read our tips on which messages suck and what you should do instead.

So there you have it. Just 12 possible reasons she’s not replying to your messages. But the most important detail to remember is this: it doesn’t matter. Rather than wallow in over-analysis, just shrug it off and move forward, because clearly she’s not the one for you. Not everyone is going to like you, and that’s okay. You don’t like everyone, either.

Don’t let a lack of response discourage you from online dating. Even though you may get more rejections, take comfort in knowing that you’ll also go on more dates. The 2015 Singles in America study found that online daters are more likely to get dates than those who date strictly offline, with 82% of online daters having gone on a date last year versus 49% for offliners.

So get back on that horse, cowboy. Because you don’t need a heap of responses, you just need one — from the right girl.