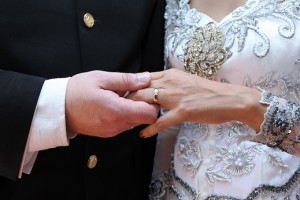 Wedding season is upon us my friends. And generally going stag to that kind of affair is the last thing you’re excited about. But, when you’re sans boyfriend or girlfriend finding a date can be a little difficult. You might find yourself exploring other options which can lead you to asking the cute guy you’ve been chatting with online or the gal hanging out at the end of the bar. Here are five reasons you should never take a first date to a wedding.

You don’t know anything about this person

I’m not saying it’s likely this person will chop you up into little pieces or anything. I am also not trying to sound like I am jaded and nothing good could come of this. But assuming this is the first time you’re seeing this person, it could be a huge recipe for disaster and this isn’t the kind of affair where you want to deal with that kind of thing

They’ll be meeting people close to you

If you take a person to a wedding, they’ll likely meet your friends and/or family. I personally believe that you shouldn’t bring people you’re dating around the people closest to you until you’ve decided this could have potential. It just opens the door for too many opinions and you can lose focus on what you want. And that’s like 10 more people you’ll have to explain to if things don’t work out.

It’s the longest first date ever

Have you ever been on that drink date where five minutes feels like five hours? Well imagine it actually lasting five hours.

It might be kind of fun to show your gutsy side to a few of your friends when you reveal this is your first date to a couple of your pals. But when you start to tell your aunt, cousin, the bride, the groom, the bride’s parents, and the bride’s uncle it’s probably going to lose it’s luster.

It could ruin the potential

Not that I am saying you’re date will be commitment phobic or that you should be afraid to say the word marriage when you’re in their presence. But all the couples and romance are a little in your face and all of that can be a little much when you’re first getting to know someone.

Can You Find a Relationship in New York City?
Why Men Stop Calling and How To Handle It
How To Act On a First Date
Interesting Online Dating Infographic Facts