Did I Just Get Catfished? Adventures in Being Stalked by a Creeper 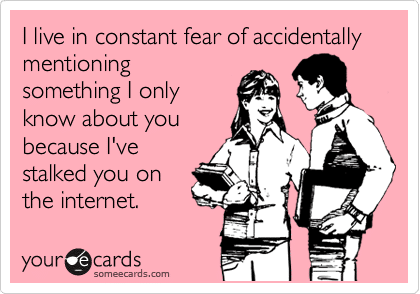 I know, “Catfish” is the word of the day these days, but I think that just happened to me recently. Yeah, this guy! The only problem in this particular situation is that it’s some funky looking dude who has a bit of a crush on me (more on that later). But to know about who I was “Cat fished” you sorta have to understand how it all got started. *Insert wavy screen and magical harp music, at the urging of my spirit fingers.*

It was a regular night, like many others. Porn, sports, dinner and coding (in that order precisely). I hear the tell-tale blip indicating that my open Facebook tab has a notification, a message. I head over and I look. It’s a message… A long fucking message. I read it. I think to myself “the hell???” I don’t even know who this character is!! Then another message comes. I don’t respond to either of them… Weird. The gist of the messages was that he knew who I was; that he knew, or so he thought, something was going on between myself and a common friend of ours and that I needed to be up front about specific dating criteria I have in place; oh and he has been reading my stuff over on my blog, which prompted his message in the first place. Noice! Well, when a message contains “I’m not trying to be threatening, but…” you’re sorta being really threatening. Whatever. Oh and the following day I receive two more messages from this clown where he gets down to business. He wants me to help him “work on this idea for a website I have…”  Oh, of course he asks me to be mature and not say anything about this to our mutual friend as a favor to him… Really? Eff. Me. Not only does this guy pop up on FB to creep me out, but he also begins to show up on my ‘visitors’ list on OkCupid… I mean, I’m not hard to find on the internet, but it does take some effort to find me on OkCupid… Sigh. Ladies… I finally get “it.” I get some of the shit you have to put up with from creepers on the internet. Granted this is a very small sampling, but I do kinda get it now.

So I don’t hear a peep from this guy in over a week and I don’t mention this encounter to our mutual friend, as I really don’t want to muck anything up. I get a comment on the Urban Dater, on one of the posts. Seems legit, I reply. Nothing funny. This same person follows me on Twitter. Starts making jokes with me and what not. That’s all well and good. Nothing wrong there. But as you all easily (and very quickly) guessed it was psycho guy from FB. You see, these comments and this Twitter account he was contacting me from was fake. Picture and all! I hadn’t put two and two together just yet and I’m shitty at math. So what! It’s only by pure chance that I found out it was him. I went to approve an old comment on a post that my new stalker had commented on as well. It was then that I saw the gravatar on his comment matched his FB profile picture. That was the only comment of his like that…

I should note that in the week or so that followed, this very persistent fellow has been trying to meet up with me to go running, or to grab a bite to eat. At this point, I know what’s up, but I don’t let on about it. Why? Because I’d like to figure out what I should do here. I’d already mentioned this to my friend about what had been going on. Apparently he’s not a first time offender. He’s creeped on other guys, too. I did some more asking around to find out who else knows the guy. Turns out a good buddy of mine games with him and lets on that he’s also bi-sexual/bi-curious. Intriguing. The plot could thicken…

I duck his attempts at meeting up at the urging of my own friends, but the guy’s a bit of a doppleganger from the Igor looking mofo from 300. What’s the worst that could happen?

That brings me to this post. As I write this, I’ve got a “conference call” on a Sunday with this turd and one of his “associates” he still thinks I don’t know who he is.

@alexjvasquez cool beans on the pressgram. How does 9-10am conference call sound? Ill call your digidesign number. Im an early person =p

Why bother with this guy? Why encourage the behavior? I dunno. It seems to me that this monkey needs to be told a few things about how to not be a creeper and all around oddball about shit like this. Perhaps someone should tell him to mind his own business and get a life.

Someone should tell “Joseph” that 9 to 10am isn’t early. But whatever, now I’m just being a nit picky jerk. Anyway, what will I say to this putz? How long will I let him carry this out? Will he reveal his true identity right away? Will he still ask me to re-build his shitty website? You guys will find out as I’ll surely post about what happens, provided he hasn’t burned my apartment down…

Alex is the founder, managing editor at the Urban Dater. Alex also runs his own boutique marketing agency in Orange County, Ca: DigiSavvy. Among his treasured pursuits are bike rides (don’t be perverted, now!), hiking, watching the Portland Trailblazers and the LA Angels. Follow Alex on Twitter.