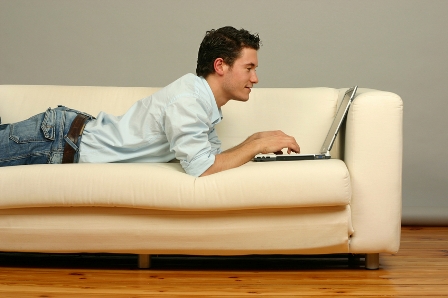 Sometimes, I feel pretty bad for guys on online dating and alternative dating sites. Somewhere along the lines, men have been taught that they need to impress women by being this overtly confident, smooth talking pick up artist, who looks like a player but really isn’t one.  They have to be some sort of alpha male to compete with all the other men on the prowl.  These kind of dating rules might apply in real life, at a bar on a crowded Friday night, but it’s a different story comes to online dating. The best way to ask a girl out online and get her to say yes isn’t by being flashy or laying it on thick and telling her the things you think she wants to hear. Nope, the best way to get a date online is easy-don’t creep her out. I repeat-do not creep her out. Ask any woman who is online dating and they’ll tell you a super creepy story about a guy who came on too strong and freaked them out! Being a non- creep is easier said than done, apparently!

Some might argue that the internet isn’t any scarier than a crowded bar, but most women are generally a bit more cautious when it comes to online dating. If she gets one hint that you might be shady or a serial killer, it’s safe to say she won’t be responding to your emails or winks.  You don’t want to give her a reason to doubt you, do you?

The easiest way to do this is to tone it down online. Don’t repeatedly email her and tell her how gorgeous or sexy she is. Don’t proclaim your love for her before you’ve met in real life. Don’t tell her that you’ve been single for your entire life…that, my friends is a little creepy, especially if you’re in your 20′ or 30’s! Don’t talk about sex too early or too often, and don’t make jokes that are borderline hostile to get a rise out of her. Every single one of these things has happened to me, and I automatically blocked each guy. Why? Not because I’m a prude who can’t take a joke, but because these guys set of my creep-o-meter, and even if they were the nicest guys ever, I was too freaked out to give them a chance to prove me wrong.

A good rule of thumb is to ask yourself how you would want your sister, best female friend or even your mother to be talked to by men online. It’s always better to be too respectful than not polite enough, so proceed slowly and with caution. If all goes well, there will be plenty of time to let your true personality show, but it’s safe to say that a woman will appreciate not being treated like a piece of meat online.

Online, there is nothing wrong with being a “nice, normal guy.” In fact, you’ll find that most women flock to the men who appear relaxed, friendly and unassuming in their online dating profiles. THESE are the kind of men who have all the luck online, because they don’t seem threatening.  Save the cocky attitude for the bar scene and be the nice guy you truly are. And if you aren’t truly a nice guy? Well, there’s not much I can do for you, online or off.

Why Karaoke Is A Great First Date
Did I Just Get Catfished? Adventures in Being Stalked by a Creeper
Essentials for a sexy weekend away
What Dating As a Single Mom Is Really Like