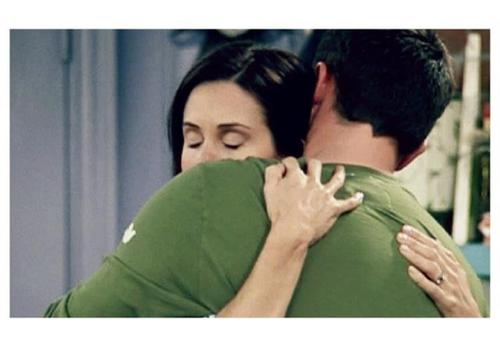 Now that Friends is on Netflix, I’ve been marathoning it like it’s my damn job. And I’ve gone through all the big relationships — Ross and Rachel! Chandler and Monica! Paul Rudd and Phoebe! — and even though it’s just a TV show, I can’t help but think about the big relationship stuff. For example, the biggest relationship question of all: how do you know when you’ve found “the one”?

There are many ways to tell if you’ve found “the one”, both big and small. Here are some of them. Please note that every couple is different and no relationship is the same. Think of these as ideas to get the ball rolling in your head, if you’re truly unsure about if your partner is the one for you.

1. You feel you can be your true self around them.

For example, you have no shame about your Friends Netflix marathons. You can whip out your geekiest, nerdiest stuff without being worried about their reaction. You can be who you really are. You have no fear. You know that no matter what, they’ll still love and respect you. Ladies, you don’t feel like you have to wake up and hour and a half before they do just to put on makeup and make yourself all glam, because to quote Katy Perry, they think you’re pretty without any makeup on. It’s all about being your true self and having them embrace that.

2. You miss them when they’re gone.

Even if you saw them the day before. Even if you actually live together, and they’re out for the night, there’s still a part of you that misses them, even though you know it’s silly. Because you want to be with them, and not in an unhealthy obsessive way — in a normal, “Gosh I wonder what they’re up to” way. It’s good to miss people. It means you want more of them, because there’s something good in there to miss.

3. They know just how to cheer you up.

When you’re having a rough day, they can not only identify that immediately, but also know exactly how to cheer you up, because they know you so well. They know what techniques will work for lifting your spirits and what won’t. If you’re the kind of person who prefers to stew alone, that’s something they know by now, and they give you your space. If you’re the kind of person who craves comfort and silliness, they know that too, and they deliver like Dominos.

Finding “The One” doesn’t mean an end to all fighting, forever. Every couple fights. What’s important is how you fight. You know how to fight fair. You know how to fight with an end goal in mind, not just for the sake of fighting, because you’ve learned how to work out your issues together. The result is that you leave the fight with something valuable — an understanding.

5. Your life goals are aligned.

You both know what you want in life, and they’re similar. The big stuff, like whether or not you’re having kids, is something that you both know and agree on. You maybe have similar career paths, or a similar timeline of when you want to achieve certain goals and hit certain milestones. It’s not like you have to have identical paths — that would be boring — it’s more like you have identical energies in reaching your goals.

6. You can’t imagine your future without them.

Not to get all dramatic about it, but when you picture your future, they’re right smack dab in the middle of it, because you couldn’t possibly imagine your future without them. Sometimes when you’re dating someone and you think about your future, they’re not really in the center of it. They might be an afterthought, a sort of, “yeah, I guess if they’re in it, that would be cool.” But if they’re “the one” for you, then there’s no doubt that not only are they in your future, but they’re a big part of it.

7. You know to communicate.

Just like knowing how to fight, knowing how to communicate is important. You know how to vocalize your needs to your partner, and vice versa, and you’re not afraid to do so. Huffington Post cited Dr. Sue Johnson, a clinical psychologist, who noted, of “The One”, “They stay close when you confide, give you their full attention and move in to answer to your needs, touching your hand when you are a little unsure, beaming and hugging you when you are glad, and tenderly comforting you when you are in pain.” They pick up on your signals, both verbal and non-verbal, and know what to do with them.

8. Your relationship is a comfortable one.

You generally feel relaxed, at ease, and happy with your partner — and this is what a comfortable relationship is. You’re not anxious or worried about where you guys are, or where you’re going to be — you’re just happy as is. You can spend the evening watching TV or you could go out and have a great adventure — either one is fine, as long as you’re together. You’re just chill. You’re not paranoid that they’re going to break up with you or cheat on you. You know you’re good.

9. Their wins are your wins.

When your partner has an amazing opportunity or breakthrough, you’re not jealous of them — you’re ecstatic, because their wins are also your wins, because you’re a team. There’s no jealousy in between you two. Your each other’s cheerleader, always rooting for one another, and thrilled when something amazing happens.

When I say, “they just ‘get’ you”, what I mean is that, your partner knows who you are and totally digs it. Something between you just clicked. You probably have lots of weird inside jokes in between you two that are hilarious and only make sense to you guys (and aren’t those the best?). They know what makes you tick, what makes you happy, what makes you sad, and they’re into it. And it goes both ways — you “get” them, too.

11. You would do anything to make them happy.

Not only would you do everything in your power to make them happy, but you’re totally willing to put their happiness before your own. If you have to be totally silly or ridiculous, you’d do it, if it brings a smile to their face. You would do whatever it takes, because their happiness is important to you.

12. You know how to compromise.

It could be as simple as letting them have their movie pick on Netflix night (sorry, Friends) or as big as deciding where to live, but you know how to compromise, and you’re happy to do it. That’s what happy couples do, they compromise for each other. There’s all sorts of things that are gonna be thrown at you in your relationship, and if you can’t work it out and compromise, you’re going to be in for a real rough time.

This isn’t to say that they replace your previous best friend — you can have more than one best friend, and they’re one of them. You’ve found someone that you can rely on when you’re totally screwed, someone to just chill with, someone to go on fabulous adventures with and also, someone to be your date to that wedding. They’re more than just a boyfriend or girlfriend to you. There’s a friendship there as well, a solid friendship that you can build on. It’s important in a relationship to have that friendship, to have someone you can talk to openly and honestly when you need to. When you’ve found that person, go for it.

What are some signs you can think of that show you’ve found “The One”?

How To Have Confidence On A First Date
Are We Dating or Just Friends?
Jewish Singles Are The Most Likely To Marry Outside of Their Faith
What to do if you hate your boyfriend's family...