14 Things Every Man Thinks About On the First Date 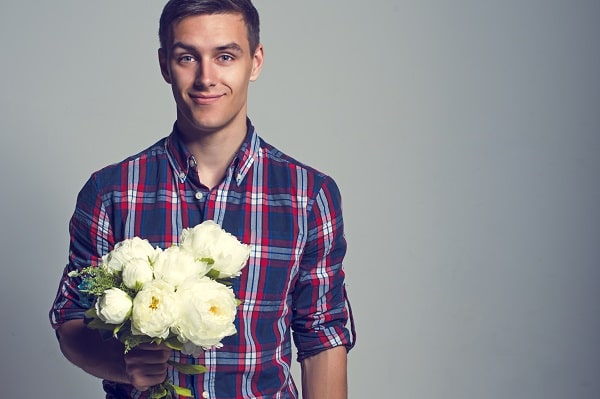 If you want to be more specific you could say a man thinks “I hope I like this woman enough to want to sleep with her.” But is this question as simple as it sounds? As a man I can tell you with all honesty that it’s a bit more complicated than that. Why is it more complicated? Well just like every woman, every man is a little different.

Wrong. Men are every bit as complicated (or messed up…it depends on your perspective) as women are. There are some consistencies amongst men so let’s explore those first. When preparing for a first date men spend as much (if not more) time in getting ready for it. Here are some titbits of what men sometimes do before a date.

DATE PREP
A) We will stand in front of the mirror for a long time.
My personal record was 45 minutes when trying to style my style-less hair. In the end I gave up and walked off looking like a cross between an upside down brush and a punker from the 80s.
B) We will obsess over where to go on the date.
This can be really stressful. On the one hand we might want to impress our date by suggesting a walk around an art gallery or stop in at a free gig. On the other hand we might want to impress by being understated and “Chilled Out” so suggest meeting in a low key bar somewhere before going on to have some food. In either case we will spend hours (often days), trying to figure out the best place or places to take you.
C) We will then obsess over whether or not we’ve made a mistake on choosing where to go on the date.
Yep, once we’ve finally made the decision on where to take you, we’ll then have a nervous breakdown over whether or not you think we’re a complete idiot for even suggesting it.
D) We wonder whether we should bring flowers for you.
We worry about whether the first date gifts thing is a thing anymore. Do we bring you a little gift, like a roses delivery, chocolates or a cuddly toy? We worry about whether it would it be cringe, and then decide it probably would be.
E) We will read your email/text messages trying to decipher whether or not we think we’re going to get laid.
I’d be lying if I said this does not cross our minds when preparing for the date. We like sex. A lot. We don’t apologise for that, but we do apologise for obsessing about it. Sorry.

EVERY MAN IS DIFFERENT (slightly)

MALE STEREOTYPES
First we need to talk about the stereotypes. You will often find some elements of these in every man you meet. We’ve broken them down into 4 types of men to give you more of an idea on what you might expect from a man when out on a first date.

GUY 1 – Casanova
Casanova is hornier than all the other men out on a first date. He will imagine himself having sex with you before you’ve even ordered your starters. Casanova’s principle aim is to try and get you into bed. Whether or not you want to let him get you into bed is another matter. He will woo and charm the panties/knickers off you if you let him.

GUY 3 – Genghis Khan
Genghis can be a bit of a bastard. He considers you a conquest and nothing more. He will act like he doesn’t care about you and will display a lot of behaviour designed to annoy yet intrigue you. If you are simply out for some meaningless sex then Genghis will hook you up. If you’re out for something more than you might want to give Genghis the finger before clubbing him with the door on your way out.

GUY 4 – George Bernard Shaw
George will hardly talk to you during the date because he’ll be too nervous. He might cover this by asking lots of questions designed to fill awkward silences. He also might try and make you laugh by telling a lot of jokes. All of this is to cover his nervousness. He might really like you, even if you think he might be emotionally retarded.

There are more stereotypes but in essence you can find characteristics from the above with most men on a first date. So now that we’ve laid the groundwork the answer to the $60,000,000 question awaits.

The order in which these are written can be re-written depending on what type of guy you’re with on that first date. We interviewed 50 men between the ages of 22 and 50 to gain an idea of the kinds of things a guy thinks about during a first date. The results vary between hilarious, sad and slightly odd. Nevertheless they all contain elements of the guy stereotypes we talked about before. They also help clarify to women just how complicated and nervous a guy can be on a first date, despite appearances.

1. You’re shorter than I expected.
This response was common amongst men between the ages of 22 and 35 who have tried online dating.
2. You look nothing like your picture.
Again this response came in stronger from men in the lower age bracket. Whereas a lot of men lie about their height online, a lot of women know how to choose the best picture of themselves.
3. This is going really well! I wonder if I should try and kiss her.
Almost all the respondents said that this thought crossed their minds when they felt the date was going well.
4. If I kiss her, I wonder if she’ll kiss me back?!
Hot on the heels of ‘I wonder if I should try and kiss her’ comes the inevitable ego worry.
5. I really fancy her. Should I try and bring her back to mine?
Yep, the old sex question rears its head through a man’s mind when he thinks the first date is going well. I was relieved to know that women often think about this too on a first date.
6. I hope she doesn’t expect me to pay for everything.
Welcome to the 21st Century. As with the rest of the world so dating also enters the modern era. Men now worry if a woman expects them to pay for everything on a first date. Many women consider a man paying as a courteous gesture, but most men now feel that as women are just as independent as men, they should not automatically expect a man to pay for everything on the first date. Most of the respondents cited a 50/50 split as a good compromise for a first date.
7. She has amazing boobs/tits/breasts.
Ah the physical objectification of body parts. We know you’re used to your boobs, but we’re not, and we love them.
8. She has an amazing ass.
The physical objectification continues. (FYI – We know women do it too)
9. She’s got really nice eyes.
Once we get our eyes above breast level we start to notice yours. Eyes can be used as one of the most flirtatious devices during a first date. They are potentially the best weapon in your arsenal if you like or hate your date. Use them wisely and we’ll know instantly.
10. I think I’m going to marry this woman.
Note: do not say yes on a first date.
11. I hope she doesn’t notice the spots on my face.
Perceived physical imperfections give men just as much grief as they do women.
12. I don’t fancy her but I don’t know how to exit the date…
Nice to know this same question plagues men just as much as women on an awkward first date. My favourite female response was “If I don’t think it’s going well, I get up shake the guy’s hand and say it was nice to meet him before walking out.” My favourite male response was “I don’t want to hurt anyone’s feelings so I always say ‘I’ll text you’”
13. I hope I don’t smell.
Did you wash?
14. I don’t know what to say.
Not the first thing that comes into your head.

Men and Women = Confusion
So there you have it, men are often just as unsure as women are on a first date. Both sexes send out mixed signals. Dating has changed a lot in the past decade but the basic questions remain: does he/she like me? Do I like him/her? We all get caught up in the confusion of how to get the answers to those basic questions, but this leaves one last question:

Would it be easier if we simply asked our date?

Looking for dates in Cheshire? Give Date Cheshire Singles a try for free today.

We Asked 25 People To Describe the Best Thing About Being in Love. This Is What They Said.
15 Ways Women Make a Man’s Heart Melt
Document Your Online Dating Experiences With BBC3 Today!
10 Ways to Tell if She Likes You