15 Things Not To Do At Your Office Christmas Party 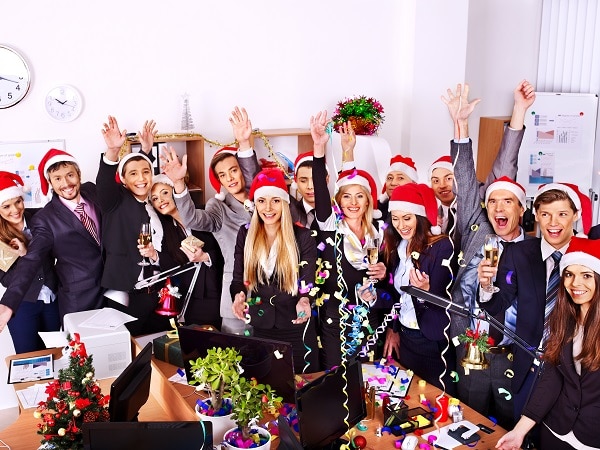 Christmas is quickly approaching and it’s almost time for the biggest event in your work social calendar – the notorious office Christmas party!
Being single, you can’t wait. You’ve had a crush on the office hottie ever since he started but have never got further than a flirty smile and the odd wink when passing in the lift. Now is your time to shine – but beware. Office Christmas parties are known for being the time of ’embarrassing incidents’, and if you’re the unlucky one, they could haunt you and tarnish your reputation.

To help ensure that the party of the year runs smoothly, here’s the office Christmas ‘what not to do’ manual:

1) Don’t dress inappropriately
This is your time to impress, so don’t ruin your chance. Guys, think cool and sophisticated like Michael Bublé. Smart, casual…and if you must, wear a Christmas tie, but don’t be tempted to wear your comedy ‘randy reindeer jumper’ for a cheap office laugh. It may make people laugh as you walk in, but for the rest of the night, you’ll be known as the office idiot.
Girls – be classy, not tarty. Yes, it’s your chance to ditch the formal grey dress and wear something a bit sexier, but don’t go too far. If your outfit is too short or low-cut, you’ll be remembered for the wrong reasons. You don’t need to flash the flesh to impress.

2) Don’t get too drunk
Yes it’s an open bar and everyone’s feeling merry, but just be sensible about your alcohol consumption. When the booze is free, it’s easy to get carried away, so know your limits. Make sure you’ve had something to eat beforehand and try to alternate the wine with water. If you drink too much, you’ll just end up embarrassing yourself or others – it’s really not worth it.

3) Don’t flirt with your boss
No, just no. It’s doesn’t matter if he’s hot, young, has been giving you mixed signals or you just fancy your chances that night – STOP and repeat this phrase in your head: ‘he’s out of bounds’. Trying to seduce the boss will only end in tears (or with you looking for a new job the next day)! It might seem fun at the time, but imagine your sober, awkward self the next day. Even worse – imagine if someone sees you…it’s a situation you really don’t want to be in.

4) Don’t just talk shop
Everyone’s got a life outside of work – so talk about it. From hobbies, to family, friends, holidays and even your favourite haunts. Now’s not the time to boast about your Christmas bonus or any promotion you think is on the cards. Yes you may be out with colleagues, but focus on getting to know them in a relaxed setting.

5) Don’t make any drunken revelations
We all lose our inhibitions when we’ve had a few glasses of vino, but if you gossip, it’ll come back to haunt you. So if you’re having an affair because your wife doesn’t understand you or you know your boss is having a liaison – keep shtum. No one is discreet at office Christmas parties and it’ll probably be the next day’s gossip. Don’t be known as the one who started the Chinese whispers.

6) Don’t start picking a fight with the person you dislike
There’s always somebody in the office that you don’t get on with; maybe they get paid more, maybe they’re the office loud mouth – whatever it is, forget about it. There’s nothing worse than an office punch-up, so even if they provoke you, just walk away, otherwise you’ll both end up looking bad (and maybe in A&E).

7) Don’t spend the whole night with the same person
There’s one important word at office parties; mingling! That’s what it’s all about. It’s the time for you to get to know each other in a relaxed setting. You may have your office best friend, but if you’re glued at the hip, what’s the point of being there?

8) Don’t joke about the boss
If you and someone on your team, share a mutual hatred for the boss, don’t whatever you do start making a joke about his big nose or his moobs. You may think you’re being discreet but after you’ve had a few drinks you may sound like you’ve swallowed a megaphone. Imagine the horror of turning around and seeing your boss (moobs-and-all) standing there glaring at you. It’s not worth the risk. Save the jokes for when you’re out of the office environment!

9) Don’t be controversial in photos
The last thing you want is the nickname of ‘flashing Santa’, and I don’t mean twinkling lights. When the cameras comes out, we can all be exhibitionists and after a few bevvies, we all think we’re hilarious, but just remember, these photos WILL resurface. The dreaded Facebook tag the next day may ruin your Christmas! Be careful!

10) Don’t be a stingy Secret Santa
We all have Secret Santa – but don’t cheat and be a cheapskate as this will be remembered. Just buy a gift that says ‘I’ve got great taste’ and it won’t be forgotten. You’ll be setting the bar sky high for next year.

11) Don’t be a mistletoe waving embarrassment
If there’s someone you fancy at the office, don’t be desperate. Waving a bunch of mistletoe in their face while puckering up will only make you look like the office creep. If there is someone who you fancy, a subtle bit of flirting is fine, but try and read their signals too.

12) Don’t get carried away with the singing and dancing
Yes karaoke can be a lot of fun, but if you start howling down the microphone like hound dog, remember – Elvis has left the building and he ain’t coming back! Similarly, don’t do a strip tease, twerk and dance like an embarrassing uncle at a wedding. You won’t look sexy and everyone will be talking about you the next day for the WRONG reasons.

13) Don’t bring a ‘plus one’ who will misbehave
Sometimes it’s nice to bring someone along rather than turning up solo, but if you’re bringing a date, make sure you’ve been out with them before and know they’re not a loose canon when drunk. If your date is shy on the other hand, don’t abandon them while you’re talking with your colleagues. They may not be good at small talk and this could put them off going to events with you (or even dating you) in the future. If you only talk about work, you’ll bore your date, so try and make it up to them with dinner another time or an extra Christmas treat.

14) Don’t do anything you don’t want others to see
These days there are cameras EVERYWHERE – from security cameras on the wall to people’s smart phones. You may think disappearing into the back office with a co-worker for a bit of tonsil tennis will remain a secret but it’s not a clever move and could cause a lot of embarrassment.

15) If you manage to behave yourself all night…don’t ruin it by drunk texting
So you’ve almost survived your Christmas party and it couldn’t have gone better. You swapped numbers with the colleague you fancy and mentioned meeting up for a drink next week. You’ve got this far – now don’t ruin it all with a series of embarrassing gushing drunken texts about your ‘connection’ and saying how much you like him/her. This could end things before they’ve even begun.

Now you’re armed with the rules – make sure you stick to them. If you do end up getting very drunk, be sure to make it into work the next day however bad your hangover is. If you’ve done something cringeworthy, it’s best to face it and apologise, especially if it was out of character.

So good luck and remember – tis the season to be jolly, so enjoy yourself!

Why It’s Great That He’s Just Not That Into You
When Your Significant Other Moves In
How to Tell the Difference between a Confident and an Arrogant Man
Document Your Online Dating Experiences With BBC3 Today!