Naughty or Nice-The Surprising Way To Keep a Man Interested 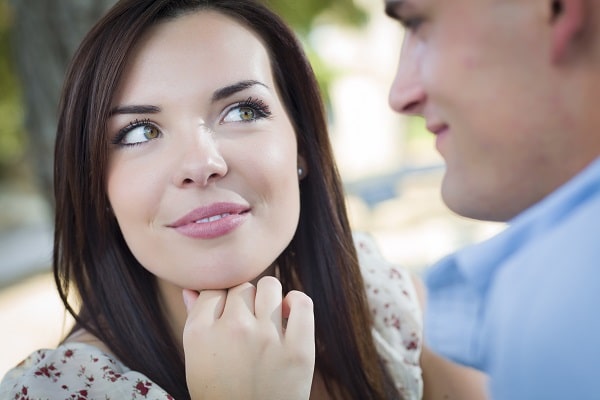 When it comes to dating and relationships, nothing puts a man off more quickly than a girl who drops all her friends the minute she gets a boyfriend, or somebody who has no interests of her own aside from cooking for ‘her man’ urgg, just writing it makes me feel dizzy. Newsflash! Men don’t want a Stepford Wife – a woman who sacrifices herself at the alter of coupledom the minute a guy is on the scene, they want a woman with a bit of fire in her belly – one who has her own life and loves it.

Transforming yourself into an object of desire isn’t about being a number one bitch with no consideration for anyone but herself, it’s about welcoming somebody into your life whilst maintaining a sense of self and independence. And it’s easier to do than you think.

If I could count the amount of people I’d heard say that they don’t like ‘playing games’ in a relationship I’d have my own private island in the Maldives by now. Games, it would seem, are something people (not least of all the slightly older amongst us, ahem) prefer to leave out of the dating game, choosing instead, to be more honest and up-front when it comes to communication and expressing what the want from a partner.

While I am fully in favour of starting off a relationship with integrity and honest intentions, games, I’m afraid, are somewhat of a necessary evil when it comes to dating.

That is not to say I would encourage people to spend their dating lives deceiving others, playing the field and treating other people like crap, but just that, to be too transparent (read:needy) early on in a relationship can leave you a little exposed. With this in mind, there are certain things I would encourage a woman to do if she wants a man eating out of the palm of her proverbial hand and my number one tip when it comes to keeping them coming back for more is …

Treating a man ‘mean’ does not mean telling all his mates down the pub what a tiny penis he has or making him clean your toilet with a toothbrush (unless that’s his thing of course) what it does mean is maintaining a sense of independence and self-worth and making sure your partner sees this.

Saying you don’t like playing games is actually saying you are scared that if you are anything but totally available you may risk loosing the guy. Game playing, treating em’ mean, maintaining your sense of independence, whatever you want to call it, isn’t just an important part of the dating process – it is essential. It demonstrates to the other person that you are not prepared to change yourself for somebody, and that, although a relationship is important to you it is not the most important thing in your life, and what could be more attractive than that?

Granted, it’s not in every woman’s nature to be a game player, somebody who misses calls to keep a guy interested or turns down the first offer of a date to keep him coming back for more. However, whether you’re the fiery, independent type or more of a ‘girlfriend’ by nature, one thing you both have in common is a life.
By which I mean, there isn’t a woman alive who doesn’t have at least one interest, one friend, a job, a favourite place to go on holiday or a hobby she’s passionate about. Are you a member or a weekly book club or a pole dancing class every Thursday? Perhaps you enjoy attending political rallies with your old school buddies or love weekend benders in Ibiza twice a year with your best friend? Whatever is important in your life before you met your partner should be just as important after.

Treating a man ‘mean’ is really just a way of saying, stay true to yourself. By maintaining your own life and interests you will be playing the mean game without even realising it. What your boyfriend will think is ‘Wow, this girl is hot, she’s got so much going on in her life, I’d love to be a part of it’ what he won’t think is ‘She’s a bitch’.

So worry less about being a bitch and more about booking that girls weekend in San Antonio – boyfriend not included.

‘But I want to be the perfect girlfriend!’

This might come as a shock, but there is no such thing as the perfect girlfriend. You aren’t perfect, never have been and never will be so why kill yourself trying to be. Aside from that, my bet is that what you think your boyfriend thinks is the perfect girlfriend, is so far off from what he actually does it’s unreal.
The ‘perfect’ girlfriend isn’t somebody who always answers their phone, always has space in her diary for a date and wouldn’t dream of offering up an opinion that conflicts with her partners it is someone who says ’This is my fabulous life! – you’re a welcome addition to it but not the centre of it.’

Bending over backwards for your partner will not guarantee love and commitment, and is not a safely net from being hurt. Far from it in fact – the more of yourself you give up in a relationship the less you have to fall back on when it ends. The biggest mistake a woman can make in a relationship is to disregard her own interests, hobbies, friends and life pursuits in order to be the ‘perfect girlfriend’ not only does it mean you’ve got nothing to fall back on it also suggests that your life wasn’t that valuable in the first place! And what could be less appealing than that.

Men are attractive to strength and confidence, a woman who knows who she is and doesn’t apologies for it. This means not being at a person’s beck and call, giving your partner space and having something to say for yourself other than ‘What time will you be homes tonight? I thought I’d cook you something nice.’

As lovely, I’m sure, as your lamb tagine is, when it comes to perfection there is no such thing. And it’s possibly the most boring thing in the world anyway. Be fiery! Be difficult! Be a little bit untameable! Far more fun than a nodding dog in the car window.

‘But I want to share *everything* with my boyfriend!’

Being sexy, addictive and desirable has nothing to do with clean towels and obedience and everything to do with being spirited. And although I recognise that maintaining an air of mystery can be difficult the longer one is in a relationship, there is no disputing the fact that when it comes to keeping the fires of passion alive, to hold a little bit back will always work in your favour. Of course, I’m not suggesting you keep whopping great secrets from your partner and turn you phone off for a fortnight at a time, but just that, even once the dating stage is over and you are well and truly coupled up, to still maintain a degree of independence will serve you well in the long run.

It is totally possible to be open and honest in a relationship with someone whilst still staying true to yourself. It isn’t about never answering your phone or creating fake scenarios to cause anxiety and disharmony but it is about prioritising your needs along with your partners.

If you are in doubt still about how to ‘play the game’ try this. Continue to live your life exactly as you did before you had the fun and exciting addition of a boyfriend. Don’t drop friends, change plans or silence yourself because you’re in a relationship – be true to yourself and the rest will follow.

And if it doesn’t? Even better, by being honest to yourself and indirectly saying ‘Hey, this is me, like it or lump it’ (although not quite in such basic terms) and you’ll soon see if it’s a relationship worth sticking with. My guess is, with confidence and self-worth you’ll have him eating out of the palm of your hand and somebody who doesn’t respect you being your own person isn’t worth having around anyway – hey presto, everyone’s a winner!

Welcoming a person into your already full and exciting life without compromising it for the sake of being in a relationship with a person who expects you to change – that’s how to treat em’ mean – and is a damn site sexier than dropping all your friends to cook dinner for two every night – regardless of how good your tagine is.

Looking for dates in Derbyshire? Give Date Derbyshire Singles a try for free today.

The Best (Worst?) Cheesy Pick-Up Lines
Use the internet to start an Austen-esque romance!
Can Someone Really Steal Your Man (or Woman)?
Dating Profile Dealbreakers