Holiday Gift Guide for the Awkward Early Stages of Dating 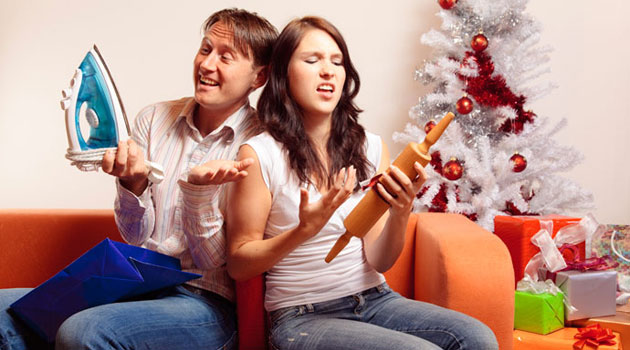 It is better to give than to receive. Unless, of course, we’re talking about oral sex.

Oh, and in one other situation: when it’s holiday time and you’re in a relationship that has yet to be defined as the ever-elusive “exclusive.”

But around tinsel time, yet another question gets thrown onto the pile of uncertainties, and it’s a biggie:

Am I expected to proffer a gift to my not-quite-significant other, and if so, what am I supposed to get?

You’re only barely acquainted with this individual, so how the hell are you to know what they would even like? Or, if you’ve only been out a few times, is a gift even required? What if one of you spends WAY more money than the other? Or the worst — what if one person presents a gift and (gasp!) the other doesn’t?

So, so many questions. Good thing for spiced rum.

To assist in your quest for the perfect (or at least not completely mortifying) gift, I’ve put together some rough guidelines. Make note: the recommendations are different for men and women, because generally speaking, the sexes have differing views when it comes to gift giving.

Gifts for Your Not-Boyfriend

I realize I am generalizing here, but in my experience, women have a tendency to go a wee bit overboard when it comes to giving presents. A few years ago I went out of my way, searched high and low and spent far too much of my paycheck on a thoughtful gift for a guy I had been casually dating for several months (he kept saying didn’t want to “rush it”). In return, he got me an enormous bouquet of nothing.

He said he was broke, felt a little guilty and was touched at my efforts, but I could tell it was the beginning of the end. Because this meant I cared far more than he did – and we both knew it. Sure enough, he bailed about a month later.

Sadly, many of my girlfriends have had similar experiences. Guys can get freaked out and feel pressured if you lavish gifts upon them too early in a relationship. So, my advice to the ladies on holiday gift giving to new dudes is this: less is more. And if you get caught empty-handed when he proffers a present, you can always whip up some last minute blow job coupons, and trust me, he’ll be happy as a clam.

Dating one month or less:

1. Nada. Unless you’re one of those nutty couples who rush into things at Kardashian speed, nothing is expected if you’ve been dating less than a month.

2. Baked goods. If you feel oddly compelled to give something, bake him some homemade banana bread or a pie. He’s a guy, he’ll dig it. Unless he’s a pastry chef.

Dating one to three months:

1. Sexy lingerie. For yourself. Wear it one night and wrap yourself in a big bow. If things don’t work out, you keep the mesh teddy.

This is tricky. If it’s been more than three months and you have still not had the exclusivity talk, it’s hard to tell what he’s thinking. A few weeks before, feel it out with a casual “So, what’s on your Christmas list?” If he blows it off, play it safe and stick with the guidelines above. If he asks about yours and hints that he might get you something, you might be safe to go a little further, like:

1. Concert tickets. But only if you get them dirt cheap on Goldstar and it’s a band you like, too.

2. Something related to alcohol. A flask, a beer mug, a respectable bottle of booze.

3. A brick of cocaine. Just kidding. That’s WAY too expensive.

AVOID: Anything cutesy or romantic, socks, underwear, watches, clothing, a transcript of your first text conversation embroidered on a pillow.

Guys, I don’t envy you. The pressure is on. In the eyes of a woman, a gift is not simply a gift, but a declarative statement that tells her everything she needs to know on the subject of how you really feel about her.

These days, the phrase “it’s the thought that counts” has become somewhat of a punch line. But truthfully, for women (okay, most women), the thought actually IS the key to finding the right gift. And it should be a thought that lasted more than three seconds, because ladies want to know that you’ve put a modicum of effort into selecting something just for her that you felt she would appreciate. If you go the highly impersonal fruit basket or gift card route, it can come off as lazy or like you just don’t care.

So, how do you know if she will appreciate it? Hint: start paying attention NOW. What does she like? What are her hobbies? Notice if she comments on something while you’re out together, for example, her love of Paul Frank novelties or how she thinks caramel is superior to chocolate on the flavor spectrum. Remember these little nuggets and use them to inform your choice of gift.

Of course, since she is still not your “official” girlfriend, you don’t want to go hell bent bonkers either. In other words, don’t go to Jared just yet. Women can get freaked out, too, you know.

Dating One Month or Less:

1. Nada. This one is the same for women as it is for men. If you’ve only just begun dating, a gift really isn’t necessary. If you want to err on the side of caution, you could always get something and then return it if she doesn’t give you anything.

2. Mix tape. Well, more like a mix CD. I think these are adorable, because it means you took the time to create something special just for her. Of course, this gift works best if the two of you like the same music. Don’t assume she’ll love your death metal mashup just because you’re president of the Cannibal Corpse fan club.

3. A small memento. Normally, I’m not a fan of gifting dust-collecting tchotchkes, but if you’re just starting to date, something cute could work – IF AND ONLY IF it has some sort of significance and is not just some random bobblehead or something. For example, maybe on your first date you saw some ducks and she named that one little duckling Darrell because he looked like a Darrell. A rubber duckie (named Darrell, duh) could be a sweet reminder of your first date and she’ll totally go “Awww!”

Dating one to three months:

This is when you should have a better feel for her tastes, and the gift you choose should reflect the fact that you have noticed. These prezzies should come with a story. For example:

1. Spa stuff (e.g., scented lotions, lavender oil, eye mask). This gift without a story could seem very unimaginative. But if you give her a good reason for the gift, it changes everything. For example, “I know you’ve been super stressed at work, so I thought you could use a little pampering.” Or, “I remember you mentioned how much you love lavender, so I’d hoped you would enjoy this lavender massage lotion.”

2. Bottle of wine. Again, this would only apply if she is a wine aficionado. Did she mention she loves a nice Bordeaux? Well, there you go. Does she like champagne? Get her the good stuff. If you’re clueless, go to BevMo and ask for help. Spring for one of those fancy wine bottle gift bags.

3. Book. Something in hardcover, on a topic she’s interested in: the works of Van Gogh, photography, Bonsai gardening. Have you been listening?

If you’ve been dating this long and you’re not yet exclusive, then, uh, why? Do you want to be her boyfriend but don’t know how to bring it up? Or do you want to keep things casual? If it’s the former, you can step it up in the gift department. If it’s the latter, then go more conservative (and you should probably also have that conversation with your lady friend if you haven’t already).

1. Event tickets: Tickets to a concert, play or other type of show that you will both enjoy is always a sure bet.

2. Future activity: Sign the two of you up for a vegan cooking class, trapeze lessons, or if you’re feeling really saucy, a weekend getaway.

3. Accessories: A high-quality hat, scarf or gloves. WARNING: you may only resort to this option if you are fairly fashion-forward yourself and have a very good sense of her style. If in doubt, ask a woman her age who dresses in a similar manner to that of your lady friend. (And don’t flirt with her.)

Again, the secret here is to make sure each gift is accompanied by a reason why you thought she would personally love it.

More examples (because I know guys need help in this department): If her phone case broke and she loves elephants, give her an elephant-encrusted phone case. If she burns candles every time you go to her place, get her some fancy scented candles. If she’s into clean living, organic stuff is a good bet.

Be sure to explain your thought process as you present her with this precious offering. She will appreciate it and you will score major points.

Now, I realize some of you may be scoffing, saying to yourself, these ideas suck! It’s okay, I’m not offended. I realize these will not apply to everyone. At the end of the day, you know your not-significant other better than I do (because I don’t know them at all), so if you just KNOW she would go gaga over a Target gift card (cough) or you are POSITIVELY CERTAIN he would adore a frilly framed photo of the two of you (you sure, girl?), then by all means, go for it. This is merely a loose guide for the frustrated and clueless, and it gives you somewhere to start.

Above all, keep in mind that while gift giving to new flames can be stressful, it is indeed a problem of the first world order. Don’t take it too seriously and try to have fun with it, because this will all seem like child’s play next year when you’re a real couple and you have to introduce them to your crackpot family.

Looking for dates in Woking? Double your chances and give Date Woking Singles a try for free today.

20 Surprising Worries That Single People Have
Holiday Gift Guide: Gifts For Your Girlfriend
How to Scare the Pants off Your Date: 5 Steps to the Perfect Scary Movie Night
Are You A Stage 5 Clinger?