My Best Dating Tip: Keep Dating Each Other 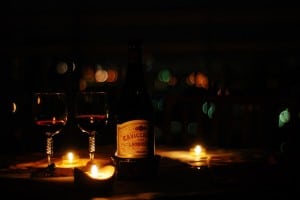 The best piece of advice anyone has ever given me since getting engaged has been to keep dating each other. And I am totally on board with it. I truly believe that you need to keep the romance. The spark. Those things aren’t the only thing in a relationship, but they’re something.

But, what I’ve learned is that it’s not enough to just go on dates. You still have to give your partner that feeling that you’re choosing to spend time with them. That’s the key and, personally, I think that’s what’s really important.

When I was dating my fiance, we would often spend weekends on the couch watching sports. Our Friday nights consisted of meeting him at his place, ordering food, and then crawling into bed around 11pm. We would often go out on Saturday, but the rest of the time we spent with snacks, TV, and a couch.

I loved those moments. It was extra time with him and spending all of that time together really let me know that he truly enjoyed being with me. I never really realized it at the time, but there was just something that happened when he asked me to come over early on Saturday or on Friday after work. It made me feel all warm and fuzzy inside.

Now, we still do those things and I still love those moments. A couple of months ago, we ordered out and watched Coyote Ugly while drinking too much vodka and whiskey. That was our big night for the weekend. And our Friday nights usually consist of tacos and Shark Tank. It’s amazing and I love having that level of comfort with someone.

The issue, however, is the fact that those “dates” don’t often carry the same meaning anymore. And that’s because they no longer feel like dates. Instead, it feels like they’re just a habit. It’s just what we do. Often because it’s what we need to do.

We both want to watch Shark Tank, so we do. Together. Because that’s what we do. We need to eat so we make whatever we planned for the night and we eat it. Dinner often feels domestic and nights on the couch feel lazy.

However, the other night he asked me to come watch TV with him and that totally changed it. Suddenly it didn’t feel like a regular night on the couch, but something that we were putting an effort into. It’s weird, but just that little something made me feel special. Even though I probably would have joined him anyway, there was something about him asking me. It made it feel like a date. It felt like when we were dating and I used to go over to his apartment and we’d cozy on the couch for the evening. It gave me those same warm fuzzies.

And it made me realize that asking each other to spend time together is actually just as important as actually spending time together. It shows that there is still an effort. That being together isn’t just a habit.

It’s not enough to just go to your favorite restaurant once in a while or to watch your favorite show together. But, you should actually ask your partner on a date every now and then. There’s just something so different about saying “would you like to have dinner with me tonight?” rather than “when do we want to go to <insert name of restaurant here>?”. It lets your partner know that you’re still making the choice to spend time with them. It lets them know that you want to spend time with them. It also keeps things new and fresh.

And maybe that’s something they should know. But, well, sometimes we don’t know what others think we should know. We also aren’t mind readers. It’s also just a nice thing to do.

So, give it a try. Ask your partner on a date every now and then. A simple little gesture goes a long way.

Document Your Online Dating Experiences With BBC3 Today!
How To Attract An Older Man
How Long Should You Wait Between Dates?
13 Signs That You've Found "The One"