What to Do When Someone Breaks Up With You Over Text

In a time when most of us are completely glued to our smartphones it’s understandable that breaking-up over text has become a common reality in the dating world. Although breaking up sucks no matter what form of communication you use, I’m of the school of thought that there is a time and place for breaking up over text. When you don’t know someone very well or you have only been out on a few dates, sending a text is often the most straightforward way to let someone know that you’re just not feeling a connection. Over the past few years I’ve sent and been the recipient of several text message break-ups. I’d much rather someone send me a polite text  than lead me on or feel they have to have an awkward in person conversation when we really don’t know each other that well. However,   it’s all a matter of perspective and not everyone shares my feelings.

If you’re addicted to reading online dating articles, you may have noticed the internet maelstrom that was caused when this blogger posted a reply to a recent text message break-up she had received.

In her original post, the woman explains that she went on a dinner date with a guy she met and then invited him to a birthday party she was throwing. A few days later she received this text from him – 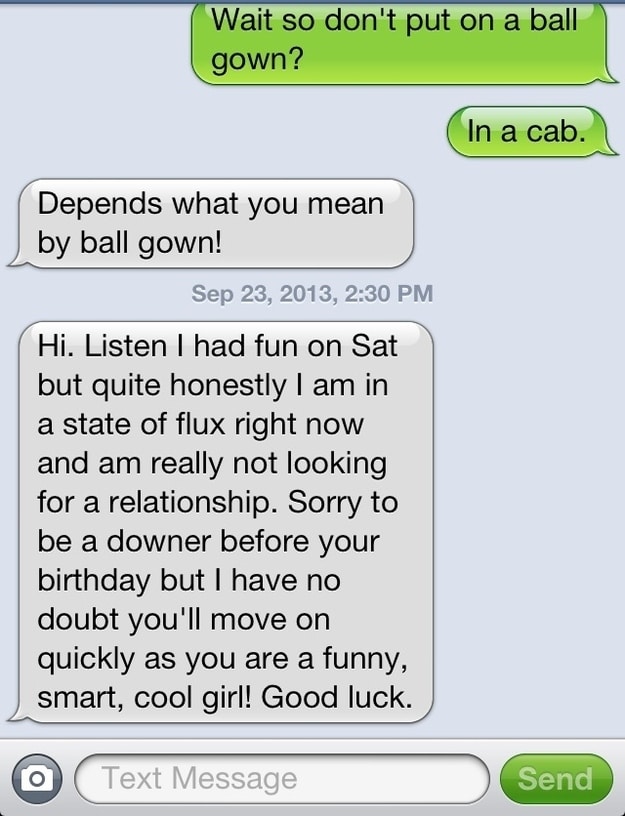 Although this seems like a pretty straightforward text, the author wrote that she was “stunned into paralysis” –

“I had no words–this never happens–and I just felt short of breath. There were many things that pissed me off, but I was so flustered I couldn’t even articulate them. Again, this is a serious problem for a writer and effusive communicator.”

In her reply she really let him have it – 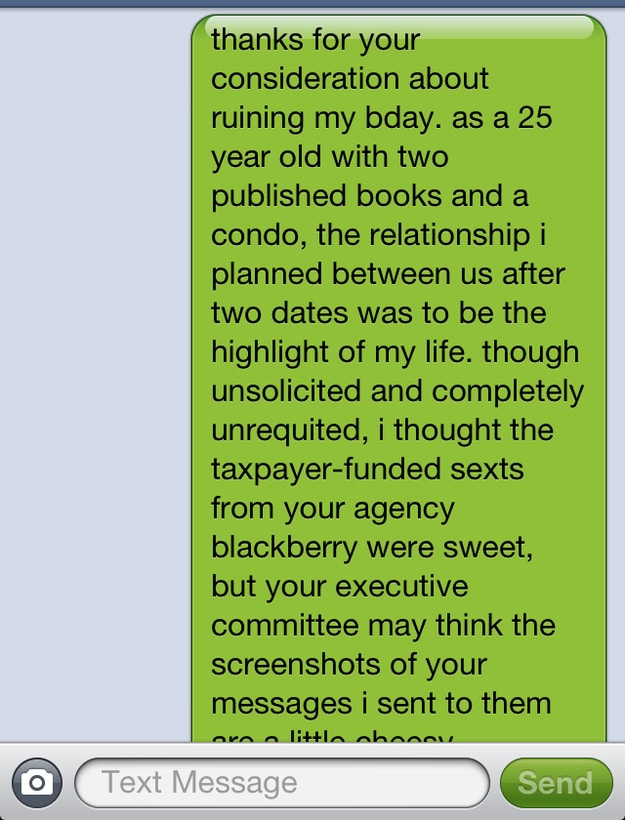 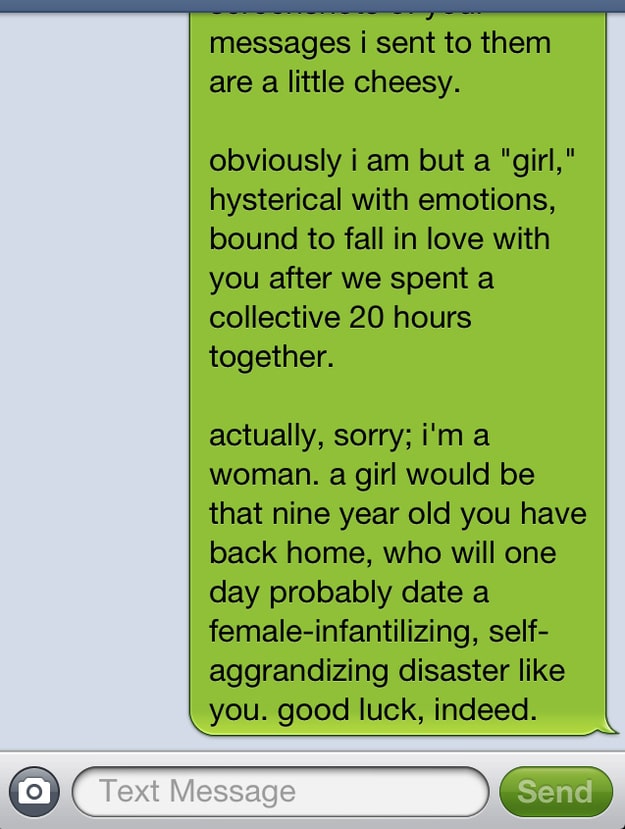 I’m all for standing up for yourself, however this seems like a grandiose overreaction on her part . It seems like this guy was just trying to let her down easy and she sent his superiors screenshots of their >sexts (cue: nightmare music.)

No matter how you slice it, rejection sucks. When something doesn’t turn out the way you hoped it’s normal to feel angry and hurt. When you feel this way it’s really easy to give into knee jerk reactions – especially when you have the technology right at your fingertips. To avoid looking like a crazy person, here’s a few things to keep in mind next time you receive a break-up text –

1. Don’t reply to the text right away – Take a breathe. Call a friend. Go for a walk. Wait until the initial shock has worn off so you can collect your thoughts and respond appropriately.

2. Don’t do anything you’ll regret later – For example, don’t send your date’s texts to their boss. So, you went on a few dates with someone and it didn’t work out – this definitely doesn’t warrant destroying someone ‘s professional reputation. Not only are you hurting them, you’re tarnishing your own reputation. It’s a small world. Their business colleagues could be your future colleagues. Would you really want to work with someone who shares private info out of spite?

3. Be the bigger person – Be polite. Be respectful. Take the higher road. Why? Because it’s good karma.

4. Don’t publish it online – I’ve definitely had my share of knee jerk reactions and sent text messages I later regretted. Until the initial anger and hurt wears off, refrain from posting anything publicly.

What are some of your text message break-up tips? Please share!